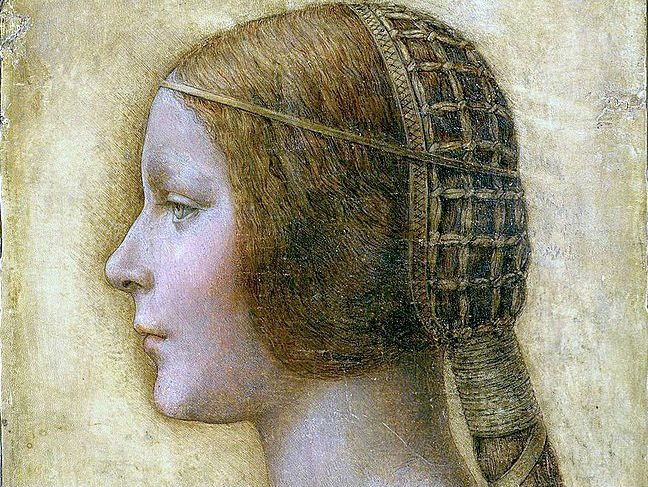 In 1494 Bianca Sforza, the illegitimate daughter of Duke Ludovico, married the aristocratic commander of his army, Galeazzo Sanseverino. She had been legitimized in 1489 to warrant a good marriage. A special presentation book, telling of the deeds of Ludovico’s warlike father, was printed on vellum to celebrate the union, with a frontispiece by Giovan Pietro Birago featuring the couple in his typical guise of infants acting out merry narratives. Bianca (“white”) is given blonde hair to identify her with her future husband. The first quire (or gathering) of 4 double sheets (8 folios, 16 pages), followed by the frontispiece, is missing one and a half of the folded sheets, indicating that something has been removed. The recently discovered portrait on vellum of a young woman in profile, which has clearly been excised from a book, fits neatly into the first quire, and is an appropriate companion to the celebratory frontispiece.

But tragedy was to intervene. Within four months Galeazzo’s teenage bride was dead from what was called a “passion of the stomach.” The fragile beauty of Bianca in the portrait stands as a memorial to her and all the many teenage brides who did not survive early marriage and the rigors of childbirth. Celebrated poetically by Bellincioni in her short lifetime, she was mourned by Niccolò da Correggio after her death, apparently at the age of thirteen.

Bianca, the daughter of the Duke, Having achieved two five year spans Plus a little more than half of the third,

In the midst of such a sweet game, She departed from her body

And went among the elected souls,

Her beauty and grace buried first in human breasts, Not content with being only in one place.

Why do you reside in different graves? The stones have her bones,

While the world sustains her name,

Since her virtues can be preserved in prose and poetry. Above all others, Galeazzo, for whom the harvest

Was reaped while still green, His fruits becoming lost,

Can declare that death was unripe for him.

There was a rigid convention in the northern Italian courts that aristocratic ladies should be portrayed in profile. This even applied to Isabella d’Este when Leonardo drew the cartoon for her portrait in Mantua in 1500. When portraying the duke’s mistresses (Cecilia and Lucrezia) the rule did not apply and the artist could be more inventive. Within this convention, as required for the duke’s daughter, Leonardo has worked his subtle magic. Bianca’s profile, set off by parallel hatching by the draftsman’s left hand, has an extraordinary living delicacy and rhythmic precision. Her eye glows radiantly and the lashes on her upper and lower lids are flicked in with a tiny brush. The knotted trenzato (net) is held in place by a thin, tight band that creates a small depression in its rear contour. Her Milanese coazzone is bound very tightly at the top. Below this, her constrained hair bulges slightly between the spiraling ribbons. The least apparently satisfactory element is her costume, although the knot design around the slashed opening of her sleeve is recognizably Leon- ardesque. This is the area in the fragile image that has been most evidently restored, losing much of the understated modeling.

Executed in ink and colored chalk (with some painted retouching), this not a painting, but it has a pictorial quality that makes the description “drawing” inadequate. In executing a work in a medium that was not usual for vellum, Leonardo reminded himself to speak to the French painter Jean Perréal about the method of dry coloring since Jean was familiar with using colored chalks for portraits. Even fixed with gum arabic, the dry pigments remain very vulnerable when removed from the protective book in which the piece was originally bound. The retouching of areas of inevitable damage has been accomplished not only with colored chalks but also with some pink

As a series of technical examinations has revealed, Leonardo’s characteristic handprint tech-nique was used to blend the tones in her cheek and neck. There are also some pentimenti (changes of mind) visible in her costume and erasures at the back of her head. Most interestingly, he first sketched in the whole of the iris of her eye before covering its upper third with her eyelid.

Having been removed from the vellum book, probably when it was in the hands of the Czartoryskis in Poland during the early nineteenth century, it reappeared in a Christie’s sale in New York in 1998 cataloged and reframed as a German nineteenth- century pastiche of a Renais- sance portrait. It had been submitted for sale by Jeanne Marchig, wife of the Italian painter and restorer Giannino Marchig, who thought it was by Domenico Ghirlandaio. It was bought by the dealer Kate Ganz, who hoped it was something better than the catalog suggested, but her contacts provided no encouragement, and she sold it to Peter Silverman who was much taken with its Leon- ardesque qualities. It was attributed to Leonardo by a number of the leading authorities to whom he showed it, but the attribution was rejected by others. The first major technical examination by Pascal Cotte (with whom I authored a book) pointed very strongly toward it being by Leonardo. Claims that it is modern forgery were decisively negated by the University of Pavia’s dating of the white lead to being at least 248 years old.

The portrait of the pretty Bianca adds a new dimension to our understanding of Leonardo at the Sforza court. He is necessarily operating with clear constraints and grappling with an un- familiar medium, but he achieves a living presence that far surpasses the routine profile portraits of the Sforza princesses by the Milanese painters, who achieved formal likenesses that were more descriptive than evocative.